i went to michael's today and walked out with some wooden discs and an idea.  when i got home i pulled a bunch of counters out of my STAR FRONTIERS boxes. i also took some from my old REVOLT ON ANTARES game.  lastly, i broke out the starship battle card that came with my X-PLORERS boxed set.  i threw all that stuff under my scanner and this was the result.
as you may have surmised, my X-PLORERS game is based on STAR FRONTIERS...which is cool, because that's one of the things bezio had in mind when he designed it. 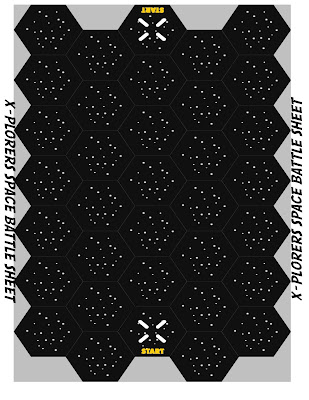 i've run a few  X-PLORERS sessions for my group so far and they seem to like it. now i think it's time to take them into space since they "acquired" a scout ship on their last mission.  so, to that end, i made this nifty little battle map that should work well with the spaceship rules. you can download the sheet here.

over the summer i made myself a TRAVELLER box for the LBB's.  since i have the bottom half of the original box i decided to take matters into my own hands. i grabbed some black contact paper from kohl's (actually FINDING black contact paper was more difficult than i thought it would be) and then got some blank shipping labels from staples. for the box itself i used one of the LAST NIGHT ON EARTH expansion boxes.  any MUNCHKIN box would have done also, but i actually use the MUNCHKIN boxes and i don't use the LNoE boxes. 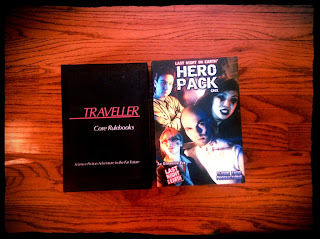 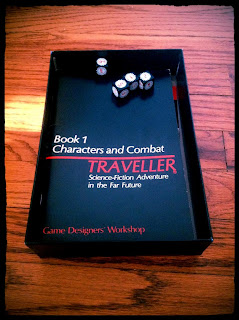 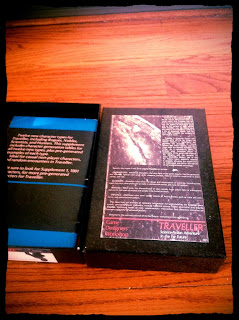 Posted by xwardukex at 9:48 PM No comments:

What's worse than getting hit with a mace? 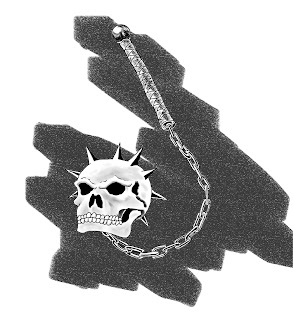 well, getting hit with a mace that looks like this.  is this a flail? the difference always eluded me. either way - the reverend christopher r. conklin just placed this in my inbox. should i be worried?
Posted by xwardukex at 10:34 PM 1 comment:

well, i've been hard at work for the last few days laying the game out. so far, so good. i've shown a few people what i've done and the response has been positive.

like i said the other day - the success of our kickstarter granted me a slight art budget.  i put out some feelers towards some artists whose work i enjoy - and what do you know, they got back to me and HEY NOW - i'm suddenly assembling a real game.  who are these artists, you ask...?

one is SATINE PHOENIX - i first saw her artwork when i stumbled across the indiegogo for MACHINATIONS OF THE SPACE PRINCESS.  check out her site here.  i just got her pieces today and they're awesome. these are my two favorites: 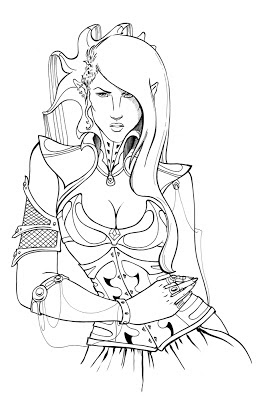 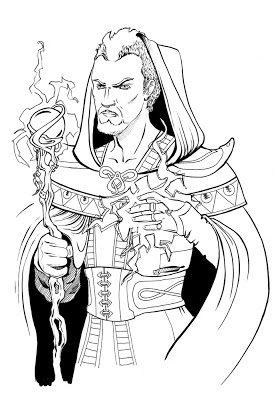 apparently all the pictures she made for us are based on real people (except for the female minotaur warrior).  the lady here is based on ULORIN VEX.  the wizard is apparently based on ALLAN AMATO...? i could be wrong on that one.

next up we have KELVIN GREEN. i first came across his stuff over on the GROGNARDIA blog. this is the picture that got me searching him out: 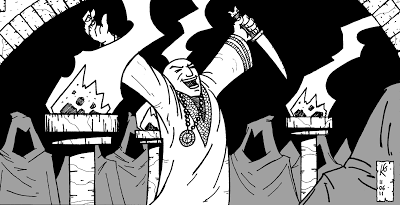 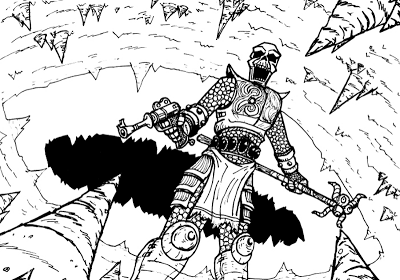 when i found his website (click here to see it) i saw this picture - the lich with the laser pistol - and it stuck with me.  a few months later i got in touch with him and asked him to design the logo for our company (LEGENDARY REALMS TERRAIN).  when i sat down to start designing DUNGEON STRIKE i wanted him on board - he got back to me today and it seems like he's in...so i'm stoked on that.  i'm also dying to run his LAMENTATIONS OF THE FLAME PRINCESS one page adventure...so good. it's called "A ROUGH NIGHT AT THE DOG AND BASTARD". you should look it up. 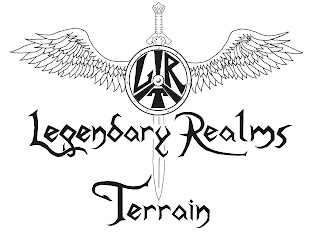 that brings us to the shadowy underworld figure known as christopher conklin.  i've been gaming with this dude since 1981 or 1982. we were in the same kindergarten class and all that jazz.  whenever i fell out of roleplaying he was there to pull me back in.  chris drew up our other logo - seen here (the lettering was designed by kelvin).  this is the logo we've been using on the back of our t-shirts (which, by the way - if you backed the kickstarter you're getting - even if you only pledged a dollar. we're cool like that).  chris also just won the online voting aspect of that contest WoTC was running - so expect to see some of his work in the upcoming reprinting of the AGAINST THE SLAVE LORDS modules.

now, while i await all the incoming artwork i've been messing around with the layout of the game and the whatnot.  there's a surprising amount of stock artwork floating around out there that's pretty good...so i've been using some of that to play around.  this is my current cover idea: 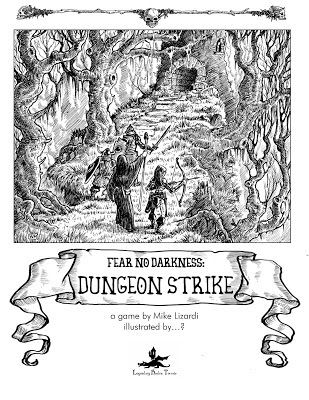 these are the current mock-ups for the monster cards, treasure cards and character cards. 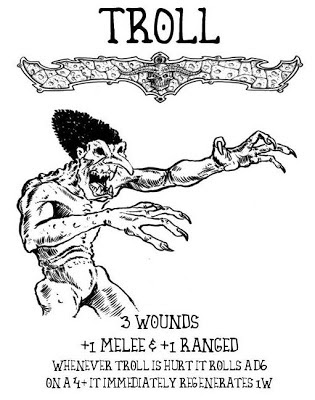 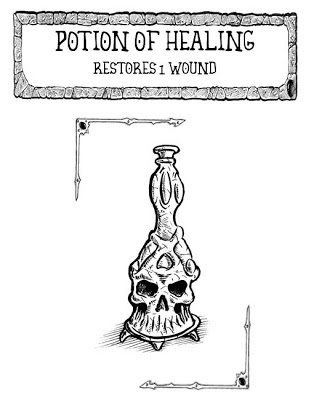 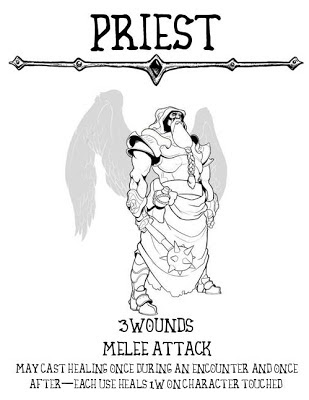 ok dudes...that's it. let me know what you think. 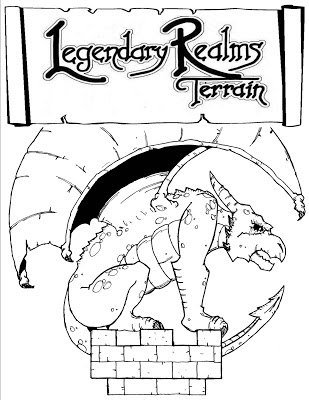 as you may or may not know, the company that i co-own with my gaming friends (LEGENDARY REALMS TERRAIN) just finished up a successful kickstarter.  you can check it out here.  this thing was way more successful than any of us thought - and for that i'd be remiss if i didn't acknowledge brian berg and TPK games, who ran this thing for us. well done, dudes.

now, one of the stretch goals was that every person who pledged would get a brand spanking new copy of the FEAR NO DARKNESS: DUNGEON STRIKE miniature skirmish game i wrote over the summer. so...let's talk about that for a bit.

the playtest pdf has been online since august and its been downloaded a few hundred times - whether anyone has actually played it...? that i can't know unless you sound off. we've played it a bunch of times at some conventions and everyone has always had a good time - lots of laughing and cheering and the whatnot as their characters fall victim to traps, trigger monster encounters, get cut down and (sometimes...though rarely) get all the way to the end.  that's what games are all about, right? having fun? ok...so from what i've seen it seems to be working in that regard.  this is the first game i've ever made, so i was nervous about the first people who played just going "wow, this sucks".

michael curtis (of dungeon alphabet/OSR fame) and george strayton (of the secret fire/star wars d6/countless other rpg related things) played it with us over the summer and they had a blast - mike even blogged about it - and they're dudes who know something or two about game design. that gave me some hope that i had made something fun that people could/would enjoy.  my initial goal in making the game was to basically have something quick and fun that could be played on our terrain at conventions. then people started asking when the game was "coming out" and that they'd want a copy, so i decided to just give away the rules for free.  it's not something that's super-serious - i wanted it to be the opposite of 4E (short and fun with character death likely) while allowing people to basically accomplish the same thing they would in 4E (killing monsters and taking their stuff). it's also an homage to the 1E megadungeon crawls i enjoyed as a kid.  as of right now, it doesn't support sustained campaign play, although that may change in the near future (more on that at a later date, though).

anyway - we hit the stretch goal for DUNGEON STRIKE and now everyone who pledged support will be getting the full on "published" pdf version of the game.  what does that mean? well, i'd like to tighten the rules up a bit if possible - so if anyone has played it and has a suggestion now would be the time to let me know in the comments. i'm also going to spruce up the rules sheet and make it more interesting to look at.  finally, i'm going to include some printable cards with the game - the monster cards will (obviously) have the monster information for the referee, while the treasure cards and the character cards will have information for the players.  last thing - all the cards will be fully illustrated - yep, our successful kickstarter left me with an art budget. i've reached out to a few artists already and two of them are on board...i'm just waiting to hear back from a third and i'll make the final announcements as to who they are - but don't worry - they ain't no slouches.

now, when this bad boy is finished it'll go out to our kickstarter backers first...i'm not sure exactly how we'll handle distributing it afterwards.

ok - opinions welcome below:
Posted by xwardukex at 4:59 PM 7 comments:

one wednesday back in '06 i was in my local comics shop - heavily engaged in a STAR WARS conversation/argument.  i had just read the book STAR WARS ON TRIAL so of course we were discussing the prequels.  i'll spare you what was said - if you're reading this you've heard variations of this conversation more times than you probably care to admit. the kid working the counter asked us if we'd ever heard of a comic called RUNNERS. none of us had. he brought a few copies up to the register and said that this was the best STAR WARS type story he had seen in a long time. anyways, i wound up buying the book (titled BAD GOODS) and loved every page of  it.

i started following sean wang (the artist/writer) over on his page...and i was excited when he began posting the follow-up to BAD GOODS (called THE BIG SNOW JOB) on his site for free (and in color). i was bummed, though, about the lack of a physical graphic novel.

two summers ago i wound up re-reading BAD GOODS so i could dive into the completed (but web only) BIG SNOW JOB...which is what triggered my search for a RPG that sort of mirrored the action seen in the series. that led me to X-PLORERS.

anyway, sean wang has recently launched a kickstarter to fund a printing of THE BIG SNOW JOB (and it funded inside of 24 hours!). still, if you want a great space-opera story with some awesome artwork (and perhaps some inspiration for your sci-fi gaming) i can't recommend these books enough. and it's totally DIY, so RESPECT.  the kickstarter has all kinds of cool rewards - so c'mon - support the man!
Posted by xwardukex at 1:55 PM No comments: